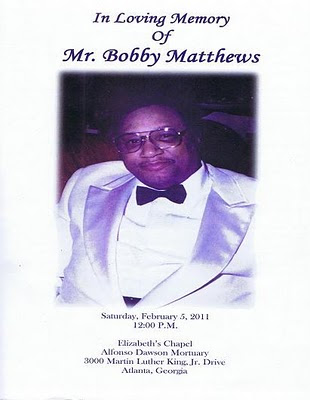 
Mr. Bobby Matthews was born on December 29, 1933 to the late Pauline and James Matthews. He peacefully departed this life on January 28, 2011. He was one of nine children. He was preceded in death by two brothers, James Jr. and Edward Matthews and one sister, Evelyn Matthews.

He was educated in the Atlanta Public School system. Upon graduation Bobby enlisted into the United States Army where he was honorably discharged on July 17, 1956. He worked in several job capacities as a cook, truck driver, warehouseman and finally as a foreman with General Motors where he retired after 30 years of service.

Bobby was joined in matrimony to Lillie Tucker in 1957. From this union they gave birth to one daughter, Kim Matthews Dawson. He also had five loving step children, Stanley, Robinez (deceased), Vickie, Ronald and Donald (deceased) Tucker.

In later years , he was united again in matrimony and from that marriage he had three adoring step daughters and one step son. He loved and adorned all his children. He leaves behind to cherish wonderful memories of his grandchildren ; three sisters; two brothers and a host of great grandchildren, nieces, nephews, cousins, other relatives and friends. He had a full life and will be greatly missed by many.