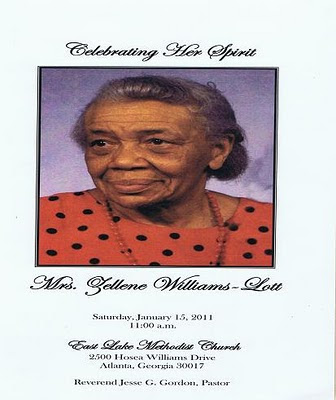 Mrs. Zellene Lott, daughter of the late William (Bill) and Susie Williams was born on July 27, 1919 in Glascock County, Georgia where she attended public school. She was converted and baptized at the Fellowship Baptist Church at an early age.

She married Wilmon Lott and unto this union, eight children were born, one of which preceded her in death. After the family moved to Stone Mountain, she joined Ebenezer Baptist Church. After residing at Rosemont Nursing Home for five years, she passed at Emory University Hospital on January 5, 2011.

She leaves to mourn her passing three daughters; two sisters, one of Albany, N.Y. and one of Jacksonville, FL; eighteen grandchildren, thirty-eight great grandchildren, and one great-great grandchild; one sister-in-law, Atlanta, Georgia, and a host of relatives and friends.