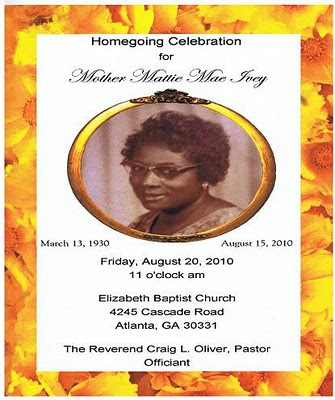 A Time To Be Born

A Time To Believe

A Time To Love

Mattie was first married to the late John T. Mott and to their union was born five children. She late married Tonie Ivey. She dearly loved all her children, grandchildren, great grandchildren, family members and friends.

A Time to Die

On Sunday, August 15, 2010, God's Holy Angels came and she transcended to her reward a place of peace. She was preceded in death by her parents, both husbands, her son James Mott, four brothers and three sisters.

A Time to Remember