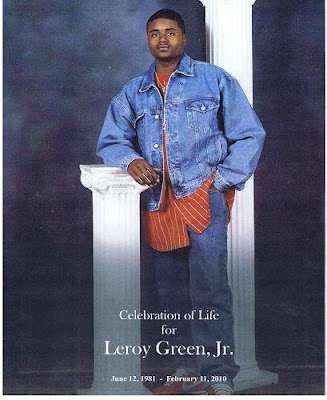 He worked at Krogers, McDonal's, Otto Interational, Durham Staffig, and Kelly's Barber Shop. He later became a mobile barber, or as he liked to call himself "a freelance barber on duly." In leisure, he loved to grill and swim! He also loved his 3-wheeler, dirt bike and motorcycle riding. His infectious smile and big eyes will be missed by all who knew him. He was loved by many.

He is preceded in death by his sister, Vanessa Chatman.

Leroy leaves to cherish his memory his parents Mr. and Mrs. Leroy Green; grandparents,brother, nephew and nieces, two great uncles, four great aunts, and a host of cousins,and other relatives and friends.